The Binding of Isaac: Four Souls

The Binding of Isaac: Four Souls is a 2-4 player physical card game based in the Binding of Isaac universe, lovingly made and designed by Edmund, Danielle and friends. It features incredible art by previously known Isaac artists: Tikara, Rojen241, Wormchild and KrystalFlamingo.

The game was crowdfunded on Kickstarter for a total of $2,650,875 with an shipping date of November 2018. Now the kickstarter is over you can buy copies for $40.

The basics (Ed's words from Kickstarter)

2-4 players take turns playing loot cards and using items to kill monsters that yield more items, loot, and sometimes souls. The first player to end their turn with 4 souls is the winner. Cooperation, barter, and betrayal is encouraged. 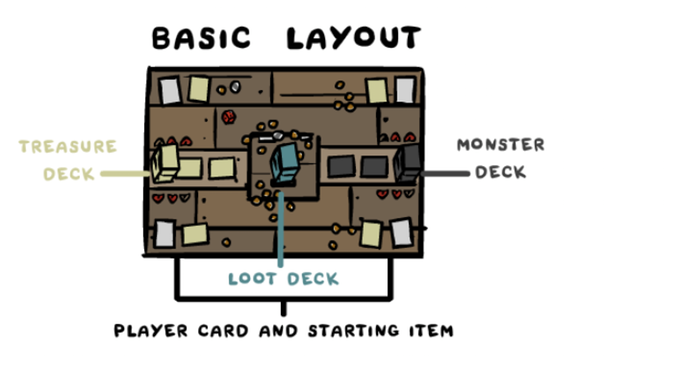 Shuffle the monster, loot, and treasure decks and place them on the table.

Take the top 2 cards from the monster deck and place them face up on the table. These are the current active monsters.

Take the top 2 cards from the treasure deck and place them face up on the table. These are the current store items.

Each player starts the game with 3 loot cards and 3¢.

Cain always goes first, if Cain is not one of the characters drawn, then the saddest player goes first.

Monsters and each player has an attack and health total, and monsters have a dice number. If you roll equal to or higher than the displayed number you deal damage equal to its health, otherwise you take that amount of damage


Here are a selection of some of the cards included...

The full spoiler is available at foursoulsspoiler.com!

Kickstarter trailer for the game.